As promised I will be keeping you up to date on our kayak fishing adventures while shooting Ocean Kayak presents  The Kayak Fishing Show with Jim Sammons and our movie Game On 2, here is a report about our trip aboard the Islander this past week.

On the morning of October 4th my videographer, Will Richardson, and I met up at Point Loma sportfishing, here in San Diego, to board the sport-fisher Islander for a six day trip down the Baja coast to Cedros Island.  The Islander, owned and operated by Shane Slaughter, along with being a great long range sport boat  has earned a reputation as the premier mothership kayak fishing operations. With her fine crew and specially built kayak rack they have long range kayak fishing down to a science. The Islander can hold 22 kayaks on her rack and with that few people it is quite comfortable at the rail. Anglers sleep in stateroom accommodations and the meals are something you would expect to get at a nice hotel not out at sea. After loading up all our gear and kayaks, filling the tanks with live bait, and getting the trip run down from our captain we headed out to sea at about 10:00am. 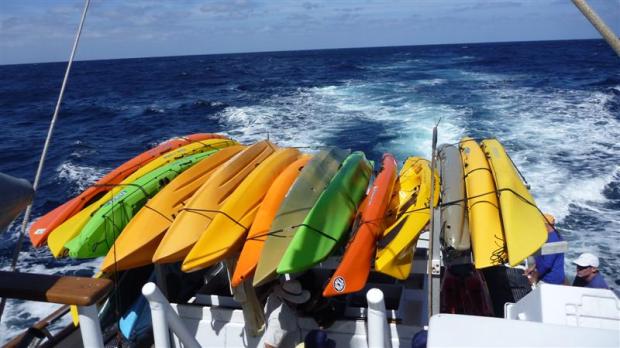 Islander with a full load of kayaks 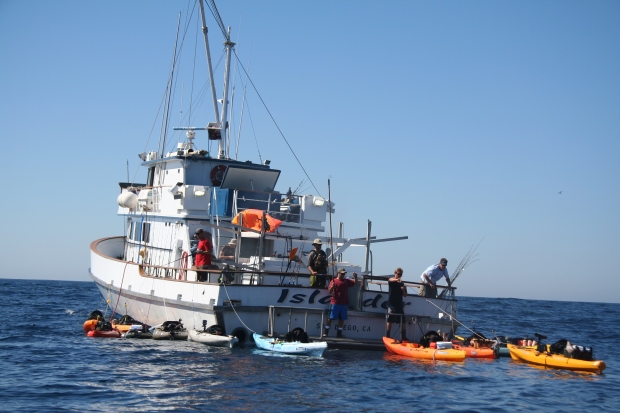 Off loading our kayaks at Cedros (photo courtesy of Paul Lebowitz)

Cedros Island is located three hundred miles south of San Diego which meant a thirty hour boat ride before reaching our destination. The wind was up and the seas were rough which meant a queasy ride for many aboard for the trip, the chef trying to feed us every two hours didn’t make things any better for many of the passengers, not being prone to sea sickness myself&nbsp; this was a great time to sit around fattening up for all the planned paddling and pulling on fish I was looking forward to.&nbsp;About 24 hours into the ride down the coast the Islander crew put out the trolling lines and we were quickly rewarded with some nice football size yellowfin tuna, though not huge by any means it took everyone’s minds off of the rough ride and got them thinking about fishing 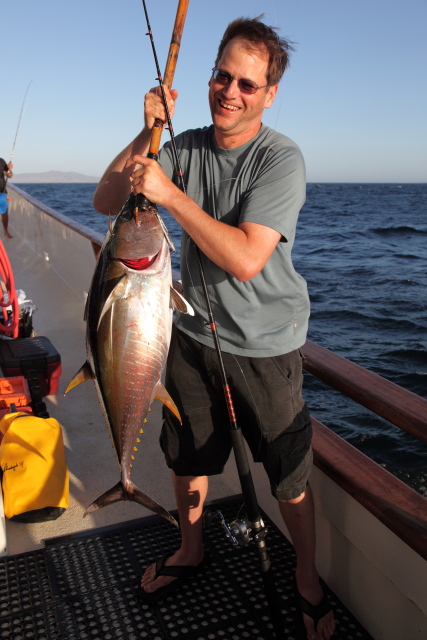 Chartermaster Paul Lebowitz with a Tuna caught off the boat. (photo by Will Richardson)

After picking off quite of few of these small tuna and a few Dorado, the skipper put the pedal down and had us at
around 4:30 pm. Though most of the anglers on the trip were interested in catching yellowtail from their kayaks my favorite prey at these islands are the Calico bass. We have these same fish in San Diego but the the quality and quantity of the Calicos at Benitos and Cedros islands is unmatched. Though still very windy we unloaded the kayaks to get in a couple of hours of bass fishing before it got dark. Fishing with my friend Paul Lebowitz we quickly paddled into my favorite place to Calico fish which is right up in the rocks and the surf, this is where the big ones live and because they are in rough conditions they pull real hard. It didn’t take us long to get on a couple of the real nice bass we were looking for. 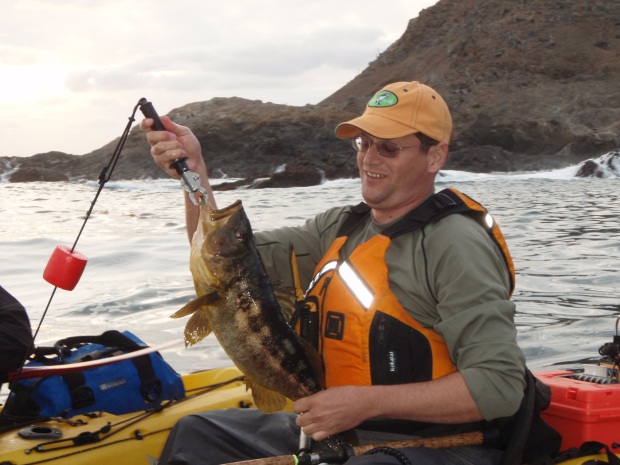 Paul with a 7 pound Calico

Jim Sammons with a 6 pound checkerboard

Darkness came quickly and we headed back to the big boat for another big gourmet meal and some much needed sleep in the lee of the island.
The boat pulled anchor before light the next morning and made the short run over to Cedros Island where we would be fishing for the next three days. Everyone was excited to get the kayaks on the water and again most of the guys had Yellowtail on their minds.  The wind was once again relentless and you just couldn’t seem to hide from it. Even with that the guys started hooking into some great fish. 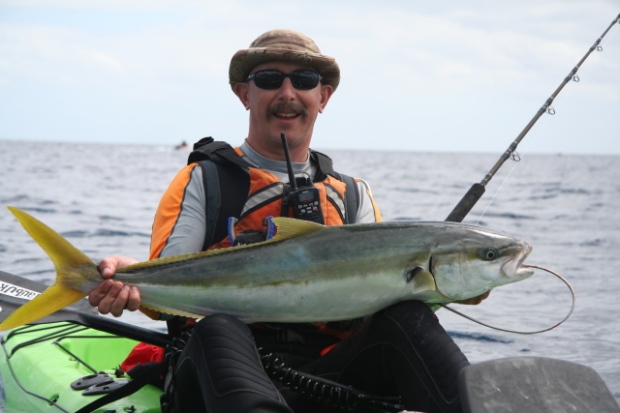 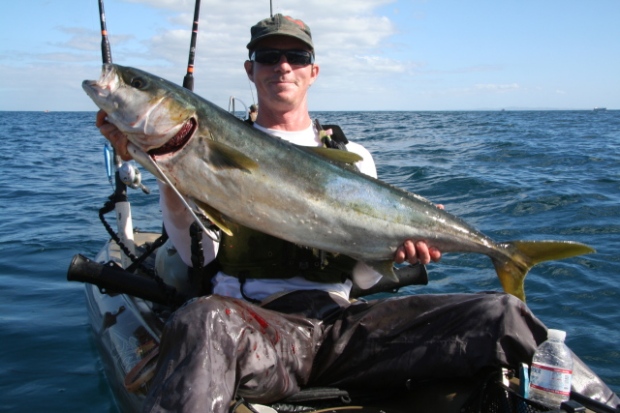 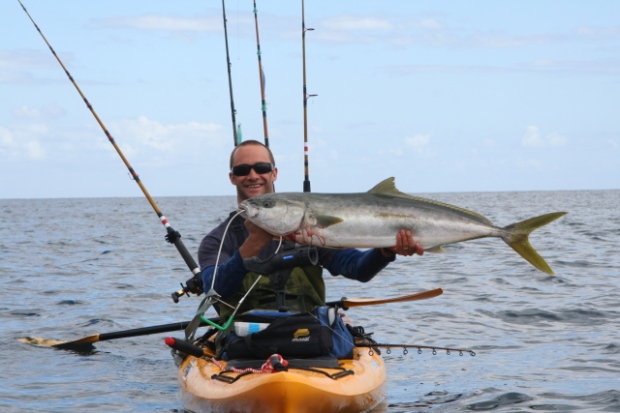 I stayed on the inside for a while getting in on my much loved Calico bass fishing with Reebs Kelp assassin soft plastic lures and Sebile magic swimmers. 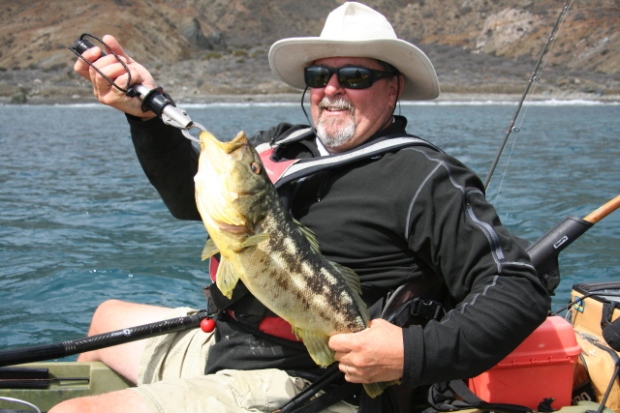 Jim Sammons and a Cedros Calico(photo by Will Richardson)

But the calls of yellowtail fishing kept coming in over my VHF so I switched gears and gave the yellows a shot. Within short order I had boated four of these tough fish. 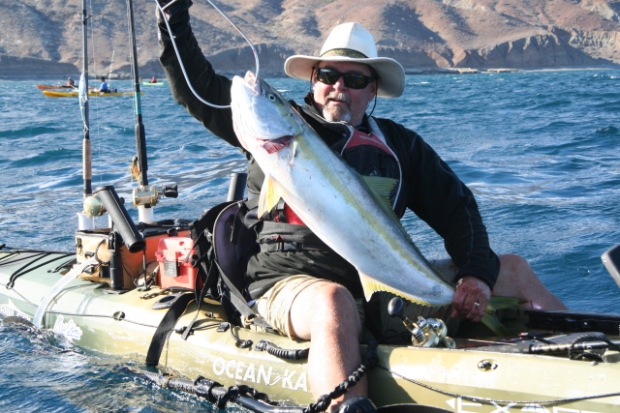 Jim Sammons with Cedros Yellowtail (photo by Will Richardson) 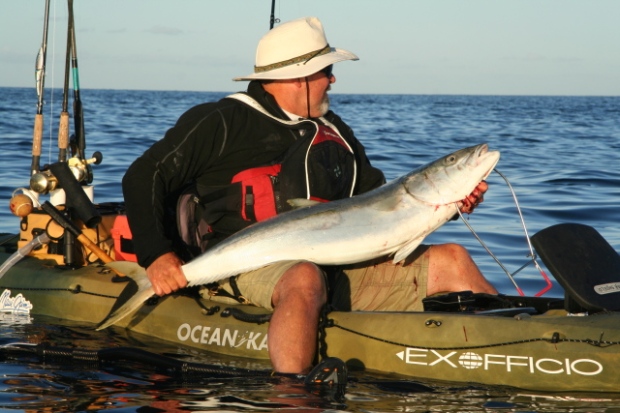 Jim Sammons with Cedros Yellowtail (photo by Will Richardson)

Day two at Cedros was more of the same with me starting out fishing the bass on the inside while the rest of the guys hunted yellowtail. On this day the wind was up even more and half the crew decided to fish off the Islander while the other half stuck to our kayaks.  Trying to stay as tight to the island as I could to keep out of the wind I was tossing a Sebile Magic Swimmer into the rocks for the bass and getting quite a few of them. While I was releasing one of my bass the water erupted a couple of hundred yards behind me. In two feet of water a large school of larger yellowtail was crashing on a school of bait in water barely deep enough to cover their backs.  Because I had my bass rod in hand, a Shimano Calcutta 300 TE, I launched my swimmer towards the school of fish and the lure was quickly inhaled. Because I was fishing in the rocks for bass I had my drag locked to keep the fish from running into the rocks and breaking me off. This of course bent my rod in half as the big yellow took me for a ride out to sea. How I landed this fish without him breaking me off I have no idea, I was rocked on much heavier gear a little later that day. Captain Shane came over in the boat skiff and took the fish off my hands to get it into the cooler on the boat so I could have top quality fish when I got home. 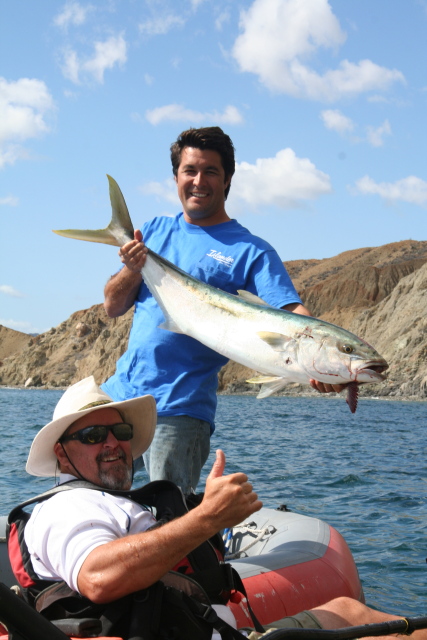 Jim Sammons and Shane Slaughter with my bass rod caught Yellowtail. (photo by Will Richardson)

The guys fishing on the kayaks got thier share of fish but word came back that the guys fishing the big boat had really put a hurt on some good numbers of fish.
The morning of day three at Cedros Island brought another day of wind, and though we tried fishing close into shore the wind made fishing very tough from the kayaks. I fished as close to the shore as I could and got a good number of bass but most of the guys just stayed aboard the Islander and fish. Tired of fighting the wind the fiew of us that did fish the kayaks headed back to the boat by 11:00 am. The captain said he was marking good numbers of fish very close to the island so we all decided to fish the big boat for the afternoon. What followed was about as wide open of a yellowtail bite as I have ever seen , at one point everyone with a line in the water was hooked into a fish. The only bad thing about that was the knowing that without that wind we could of all been on these fish from our kayaks, though no one was complaining, there was too much action going on aboard the boat. 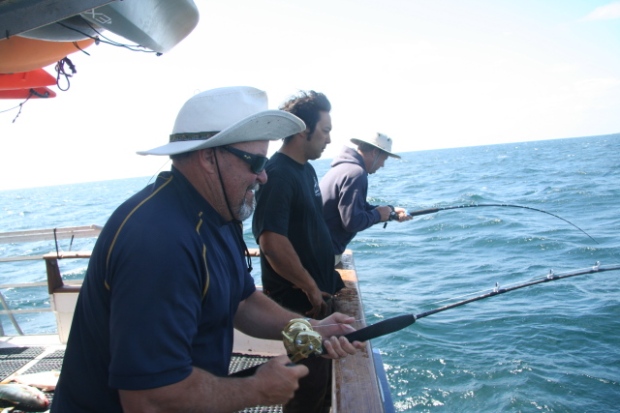 Jim Sammons with a boat yellow 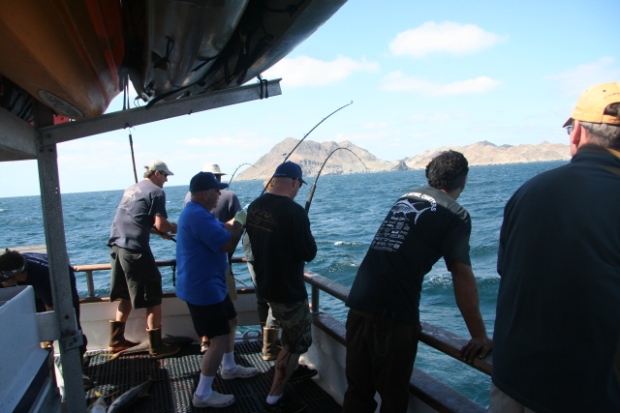 The Hot corner (photo by Will Richarson) 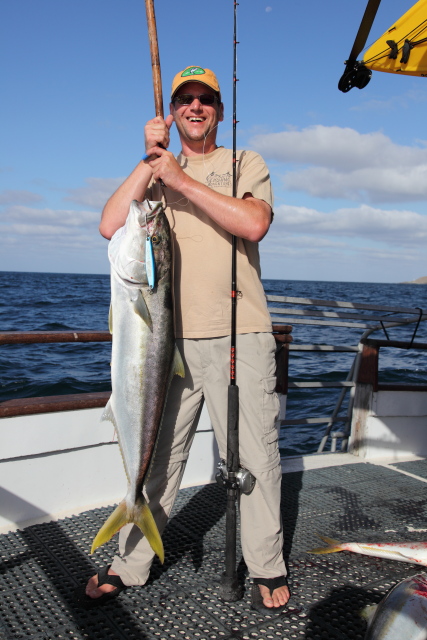 This bite went on for about three hours and a lot of fish hit the deck.
After that we started our long 30 hour boat ride home, once again in tough conditions. A couple of stops were made on the way home for some nice size yellowfin tuna but mostly is was just slow going heading into the wind and swell.
Though the conditions were not ideal on this trip I think it will show people the potential of this type of trip with the kayaks. If only a bit better weather was had I know our counts from the kayaks would of been out of this world.
Anyone interested in one of these trips should contact the Islander Sportfishing office.
Once again we are always looking for that next great kayak fishing destination, so if you have some ideas please feel free to contact me at  Jim@Kayak4Fish.com
If you are not already getting WFN, please contact your cable provider and let them know you want WFN so you too can watch The Kayak Fishing Show with Jim Sammons.