We are back from a difficult yet rewarding adventure near Pompano Beach in southern Florida.

As the crew and I prepared to board our planes, we received word that high winds would be beating up the coast and that our guest star, Patrick Sebile, was down with bronchitis. With boarding passes in hand, it was too late to postpone the shoot, but knowing that Florida always has something to offer we made the decision to push on. 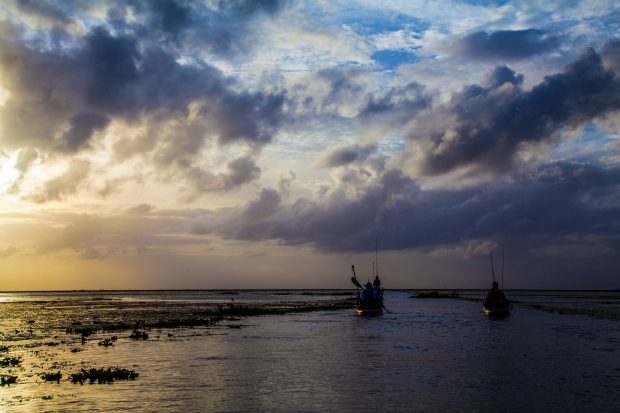 We arrived in Fort Pierce and hooked up with our pal, Brooks Beatty, from Jackson Kayak. With the high winds in the forecast, Brooks had come prepared with a Kraken and a Mayfly rigged up with Power-Poles—it might be windy, but at least we had the tools to face the winds head-on.

Shortly after our arrival, we got word that the wind and surf was just too much and The Extreme Kayak Fishing Sailfish Smackdown we were slated to take part in had been cancelled. With this news, we knew that any chance of fishing offshore would be difficult at best, so we put our heads together and came up with a plan. We decided to stay mobile to maximize our time on the water. With a break in the winds, we managed to fish the channels near Fort Pierce with success—we smashed out a dozen or so blues, reds and snook. With a decent adventure under our belts, we were feeling positive and braced ourselves for the incoming winds.

‘Winds gusting 50 mph’ isn’t something you want to hear on a good day, let alone when you’re planning a fishing trip. Knowing that even protected lakes and channels were going to be rough, we put on a brave face and tried regardless. We met up with Extreme Kayak Fishing Tournament founder, Joe Hector, for the day of fishing in the channels of Pompano, but a cold snap covering Florida had driven the exotics deep and Joe only managed a couple of largemouth.

The second day of high winds forced us inland, so we packed up and drove three hours north to fish with top angler, Jason Broach, in the world-famous Stick Marsh. A difficult paddle in was well worth the reward, as we were greeted by hungry largemouth and Jim landed his personal best bass—a 22.7 inch estimated at about 8lbs.

We got word that Patrick Sebile was feeling a bit better and was up to hitting the water. Even with an early start, the winds kicked up in full force again and we only managed a couple of ladyfish. With that, we called it wrapped the shoot. Once again, Florida tried to beat us but we were resilient and managed to pull off a good shoot. We’re already looking forward to our next shoot in Belize, where we’re meeting up with Damon Bungard from Jackson Kayak/Orion Coolers for an epic week of hooking into bonefish on the fly!