On March 8th, after months of anticipation and planning we took to the air for our long airplane ride to Auckland New Zealand. The Kayak Fishing show had been invited to visit NZ by the crew at Ocean Kayak New Zealand to check out their line of fishing kayaks and experience their world famous fishery. The plan to shoot two episode of our show and experiance the area made famous in the stories of Zane Grey in this beautiful country, it didn’t take much persuasion to get us to come for a visit.

When I arrived in Auckland I was met at the airport by Tony Free the General Manager of OK NZ and whisked away to the Johnson Outdoors facility where I was asked to speak in front of the Hibiscus kayak fishing club. I must admit after the long flight it was not my best seminar performance, but the guys there were great and it was fun to exchange ideas with people from another country that share my passion for kayak fishing.
My videographer, Will, showed up a bit after me and filmed the seminar which I am sure I will not want to watch.

Our first full day in NZ was spent at the OK facility where we spent time shooting around the plant, going over the kayak production process and rigging up our kayaks for the upcoming fishing adventure. We also were introduced to our fishing partner for the trip, Jai Sanders. When I was told we would be spending the week fishing with a cheerleader, Jai was not what I had pictured. Of course the jokes of him being a cheerleader didn’t last long as he made the comment “how would you like to go home and tell everyone you got your butt kicked by a cheerleader”. I am pretty sure he could do it too, after watching video of him tossing his wife, another cheerleader, from one hand to the other over his head.

As so often has happened for us on our travels we had to deal with weather issues, this time it was high winds, which as any kayaker knows is the hardest element to deal with. We had planned on heading to Coromandel but the weather reports for the area were not good so Tony got on the phone and made alternative plans for us. It was decided that rather than head offshore we would go to Taupo Lake and meet up with a local angler, Brian Dalton who specializes in trout fishing from his Ocean Kayak Torque. Though I was disappointed about the weather I was excited to once again try a new style of fishing.
We drove three hours from the OK plant to Taupo Lake and were put up in a nice little motel. I guess a little jet lagged and confused Will woke up at 2:00 am, showered and made coffee and tried to wake us, thinking it was 6:00. Jai proceeded to threaten his life, if he didn’t leave us to sleep, which is when Will realized his error in time. Of course we didn’t let Will forget about this the rest of the trip.

Brian really knows this fishery and gave us the instructions we would need to be successful at our endeavors. Because of the high winds we would have to find an area of the lake that was sheltered but hopefully also holding fish. Brian told us the fish were holding in deeper water and we would be using a jigging technique in which we had a heavy lure on the bottom of our line with two flies spaced evenly just above it. After a short paddle to the spot it didn’t take long for Brian to get on the first fish. It was actually pretty funny because his hookup happened while we were interviewing him about kayak fishing. The words “because kayaks catch fish” literally just came out of his mouth and he hooked up, we all started laughing our butts off, you could not of scripted it better. It took Jai and I a while to get used to the technique of this subtle jigging, as we are both offshore anglers primarily, and I had to figure out the new Humminbird side scan fish finder we had installed in my kayak, but once we had things worked out it was game on. I think we landed close to 30 nice rainbow trout, in the 2-4 pound range over the next three hours of fishing. We timed up our exit from the lake with perfection as just when we got off the water the lake turned into a churning cauldron from the high winds. We released most of the fish but kept 3 which Brian cleaned up and cooked for us for lunch. I had never actually eaten trout and I have to say it was delicious, particularly when paired with some good bread and a few cold New Zealand beers. 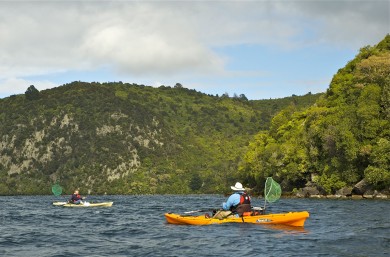 Brian and Jim on the Lake

My first fish in New Zealand 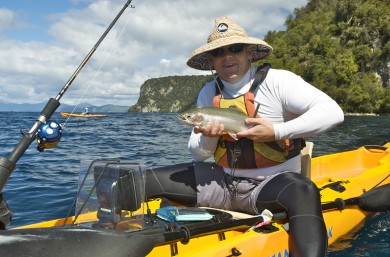 Just before getting off the lake we received a call from Tony that the weather reports for Coromandel were looking better and that we should pack up our gear and he would come get us and take us on the 4 hour drive to our next destination. Unfortunately most of this drive was done in the dark, so we didn’t get to see all the beautiful scenery that Tony was telling us about. The first stop was to meet up with Rob Fort, the owner of Coromandel Kayak Adventures who would be our guide for the next four days. We transferred our trailer from Tony’s car to Robs and made the half hour drive on the winding, steep, dirt road to meet our boat captain Peter MacKenzie. Peter and his girlfriend were waiting for us when we arrived with a steak dinner and some cold beers. We sat up late discussing the following morning’s plans, which would involve towing the kayaks out to our mothership and transferring all our gear from land to boat to mothership. We all worked hard to make the job fast and efficient and I must say Jai’s strong arms and back really came in handy, now I know why he was invited. 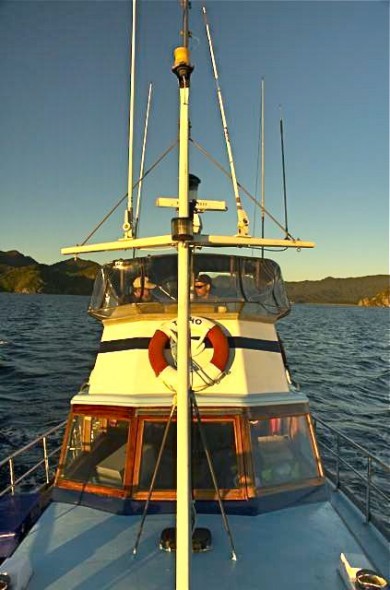 Our home for the next few days

Once all the gear was loaded aboard the Taiho the plan was to tow the kayaks to our first destination. A veteran of many kayak trips involving towing of the kayaks I was not real thrilled with this idea particularly with the seas we would have to deal with. Towing a kayak in following seas at any speed can be a trial in futility and this proved true on this trip, two kayaks were flipped and one fishfinder destroyed before we could talk Peter into letting us load the kayaks onto the boat. Once we figured out the system of loading and unloading the kayaks from the Taiho we could move at a faster rate and be in and out of the kayaks in a hurry. 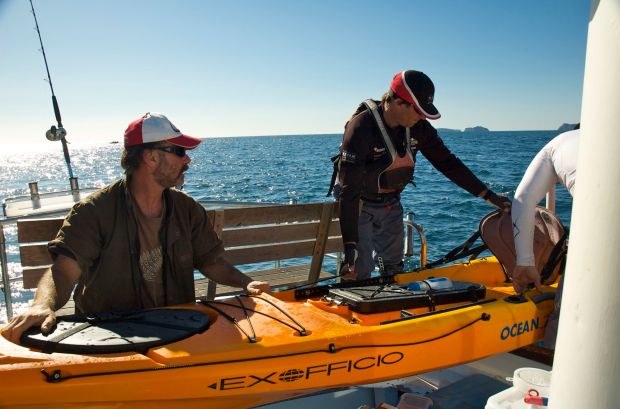 Peter and Rob, getting the kayaks aboard

We soon came upon a large school of bait and proceeded to put a few Kahawai in the bait tank. These were a huge bait fish that were actually pretty fun to catch, they pulled hard and put on a nice aerial display. The target species on the trip were KingFish aka Yellowtail which can grow to over 100 pounds, Marlin, which these large baits would be perfect for, and Snapper a tough fish living near the rocks.
For the next few days we moved from island to island trying to find sheltered areas to fish out of the 25-30 mph winds. Up tight to the islands we mainly targeted Snapper with softbaits, which the local Triggerfish, call leather jackets, seemed to love, as they ate them so fast you would think you were dunking the lure in a tank of Piranha. We still managed to land a good number of these scrappy fish, and as a bonus while fishing with my light bass rod I landed a 10 pound Kingfish, somehow keeping from the rocks.

Note the white caps, and this was in the lee of the island 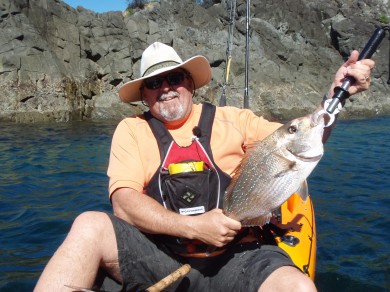 One of the many Snapper landed during the trip 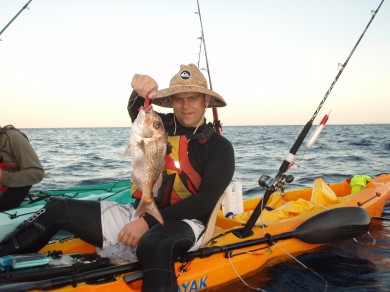 Thankfully Jai lost this hat soon after this shot

Jai and the Birds

The scenery on the Coromandel portion of the trip was amazing and Rob Fort of Coromandel Kayak Adventures and Peter worked their tails off trying to get us on fish. We saw plenty of signs of good fish but always in very exposed areas that we just couldn’t fish due to the high winds. We ended up pulling the plug on this segment of the trip a half day early, just so we could get a start to the second half of the trip at Bay of Islands. 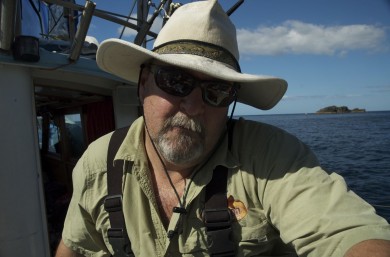 Yes, I am a little tired of the wind

Raising our Flag in surrender to the wind

Hoping the winds would give us a break and the fish would cooperate we took the four hour drive to our new location and new home for the next five days, Cool Change, a 54 foot sailing Catamaran. I think a better name for this boat would have been Pure Luxury.

The Cool Change, loaded and ready to go

Visit our blog in a few days for the full report of the second half our adventure in New Zealand, a little hint, the wind died down and the fish began to chew.

During shooting of the original Game On movie last year, Howard hooked into a very large blue marlin, and spent the next 5 hours getting towed 11 miles out into the Sea of Cortez.  Although a part of that battle was featured in the Game On movie, the full battle is now available to watch on YouTube in full HD.   Is it ever cool to be able to post and watch video on YouTube in HD!   You do need a good connection speed to do so, but it’s a different viewing experience altogether.