Following our amazing adventures in New Zealand, we traveled back in time (crossed the international dateline) in hopes of continuing our lucky streak in the Bahamas. Upon our arrival it was evident that the sea gods wanted a little pay-back for their generosity in New Zealand.

We met up with Capt-Esteban Gutierrez of Blackbeard Fishing Company, Luther Cifers of YakAttack, and 50 mph winds upon our arrival in the Bahamas. The winds, and accompanying torrential downpours and rough ocean, lasted for two days. Our goal to “Battle in the Bahamas” in the Extreme Kayak Fishing Tournament was beginning to look as washed out as the walls we were staring at inside our hotel room.

On the third day, the clouds parted…but so did our guide. Being nowhere to be found, it turned out he saw an opportunity to take the money and run. To say we were a little let down would be an understatement.

By this point, the sea gods had their fun. The tides turned with the arrival of our host Joe Hector who, along with his wife Maria, run the Extreme Kayak Fishing Tournament. Within minutes, we had a boat, the weather cleared and we were off!

Esteban hooked into a nice dorado!

We hit the water and were amongst almost one hundred kayak anglers from around the world who were hooking and landing some monster fish.I found it really cool to see other folks paddling the JK Kraken in the tournament. There were plenty of Kraken 13.5 and 15’s on the water and those anglers proved that you don’t need peddle drives or a huge boat to haul in the big ones—a Kraken paddler even took largest fish in one of the 4 categories. The JKrate bait tank was clutch on this adventure because if you didn’t have bait, you didn’t have fish.

Plenty of these babies all around the tournament.

Trying to get something on the line during the tournament

However, the hardest part about shooting in these big tournaments is seeing so many folks without PFDs. When we heard excuses like, ‘it’s too hot’ and ‘I don’t find them comfortable’, I took the opportunity to show off the Kokatat SeaO2 features that mitigate the reasons for complaints. Hopefully next year we see more anglers wearing proper PFDs…

Probably my most electrifying angling encounter in this tournament was with a massive sailfish that charged my boat and threw the hook in the blink of an eye. 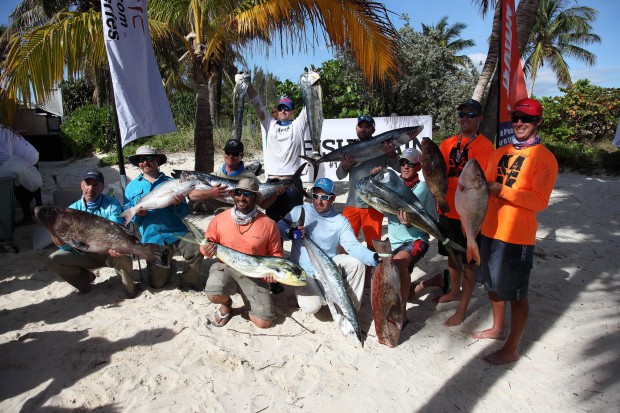 In the end, we had a fantastic trip exploring the island, meeting many great locals and characters from the global kayak angling community, and enjoying incredible food. Joe Hector and the folks from The Extreme Kayak Fishing Tournament were fantastic and we can’t wait to work with them again.

Fresh back from 23 days filming abroad, we are road weary, heavily bearded and tired, but the adventure was nothing short of epic. First stop of the trip, Middle Earth; New Zealand.

We arrived to a punishing wind storm and our hearts immediately fell. This place has always delivered incredible fishing, but wind and kayaking the open ocean don’t pair well and we feared our objective was impossible. The storm packed 40 mph winds that shut down half of Auckland. 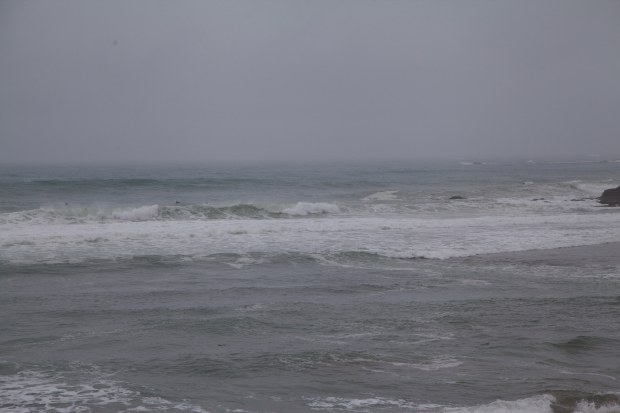 Some unfavorable weather to start our trip

The Maori gods must have decided we were ok lads; the winds died and we were given a seven-day window of perfect conditions.

We hooked up with local Jackson Kayak pro staffer, Brent Klink, who perfectly nailed the logistics and planning for the trip.  Throughout the shoot, we paddled Jackson Kayak Kraken—straight up, the best boats for these waters. I had an opportunity to meet with distributors to get them excited about selling the boats, and had a very well received demo night with the local club.

Pulling in some huge snapper with Brett Klink

Having a great talk with the North Shore Kayak Fishing Club

New Zealand is a great market for the Kraken. We were told that a huge number of the population are anglers, and a growing number of those fish from kayaks (we were given an unofficial number of 40%), this place is a hot spot. Locally made boats ring supreme here, but that is countered with an overall dismay at the lack of popular design features that come standard on boats coming out of North America.

We set our goals for the trip—trout, kingfish, snapper—and set out for the local trout fishery, where we met up with local angling celebrity Shamus. Shamus fishes almost exclusively for trout on his SuperFishal. He would be an ideal contact to talk about the huge and growing SUP fishing market ready to hit on the North Island. Our first day on the water was spent here where I managed to limit-out by mid-afternoon.

Shamus fishing for trout on his JK SUPerFISHal

The following two days, we targeted kings and were royally pleased to hook about one hundred or so big kingfish.

With successes coming easily, we upped our third goal from merely catching snapper to catching 20-pounders. Amongst the boiler rocks along New Zealand’s stunning coast, these goldenred beauties were hale, hearty and abundant. 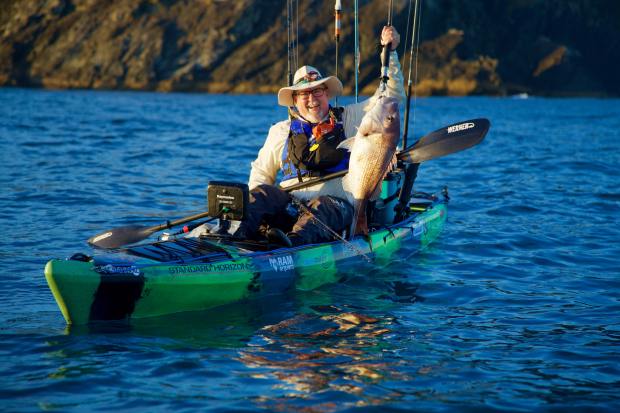 Six years ago our first adventure in New Zealand with big sharks lead to our introduction to Shark Shield, this time we returned with the Shark Shield in hand. Everyone wanted to know if I still keep my feet in the water given the experiences last time in NZ and we loved telling them that now that we have a Shark Shield…we do it even more.

Kerry with a shark snack

With the landscape, the locals and the unending fish, it is no surprise that the footage from this trip is amazing. We are incredibly happy to report, with full smiles, that this has been one of the best shoots of our eight years of filming.